In a recent blog, I published an excerpt of an interview with British advertising legend John Hegarty, co-founder of Bartle Bogle Hegarty. While he was there in Cannes for their 2018 Festival of Creativity, he had more to say during a lunch event.

Here are some of Sir John’s pearls of wisdom:

“The fundamentals of marketing haven’t changed, the tactics have. But the marketing industry has forgotten the art of persuasion.”

“Marketing people don’t step out of their bubble enough and see how the general public live.”

“The separation of media and creative was one of the biggest mistakes ever. The market isn’t always right.”

“The three pillars of branding: Is it memorable; am I motivated by it; is it truthful? We remember ideas and things that move us.”

“We’re living in a celebrity culture, not a fame culture. Fame adds to a brand’s value, even if you’re not going to buy it. A brand is not only made by the people who buy it, but also by people that know about it.”

“The foundation of brands is trust.”

“Data has been around since the nativity, but we’ve become slaves to it, like we did with market research.”

“Being the biggest isn’t the same as being a brand leader.”

Have a favorite? Let me know!

Sell red what? That’s what I thought when I first saw the headline, “The Inside Story on Why Burger King Sells Red Burgers in Japan.”

I didn’t think someone would make this up, especially since Advertising Age was reporting the story. Well, I became intrigued and felt like this may make for an interesting blog post on a site like this, exploring all forms of creativity and innovation.

Even in a land of relentlessly wacky fast food innovations, Burger King Japan has nabbed a lot of attention with its all-black burgers. 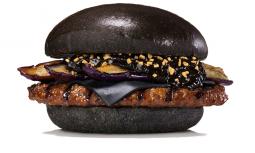 Yeah, you heard right. The sight of pitch-black buns and cheese, evidently, really gets to people.

But wait, that’s nothing.

What Better Way to Get Brand Attention on a Tight Budget?

The Aka Samurai from Burger King Japan. Also comes with chicken. 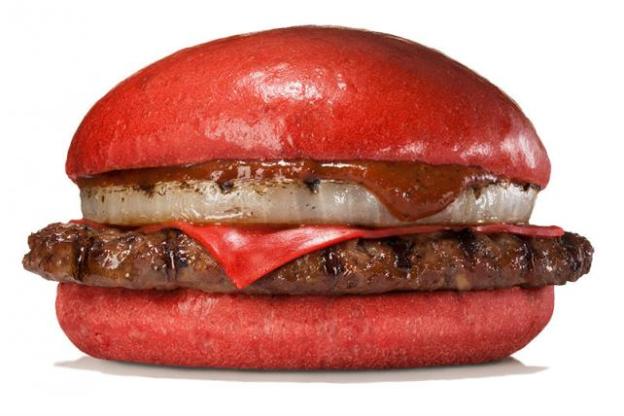 Obviously, the folks at Ad Age were curious, too. So, Burger King Japan’s general manager for business management, Masanori Tatsuiwa, who worked previously at agencies including Ogilvy & Mather Japan, answered a few questions about the red Aka Samurai Burger (buns and cheese tinted with tomato powder), the black Kuro Burger (which used bamboo charcoal and squid ink), as well as the brand’s “flame-grilled” personal fragrance.

Here are excerpts from that interview . . .

Ad Age: Where do these ideas come from, and what’s your process?

Mr. Tatsuiwa: We sit down with marketing and R&D look for something unusual. When we start to think about something, we have taste tests inside the restaurant. We have 93 restaurants in Japan.

At the moment we don’t have much ad budget in our hands, so we do almost everything by ourselves. We are not using any creative agencies for these products. This way we don’t need any big money to expand our awareness in the market.

Burger King is not big compared to the competitor companies in Japan. McDonald’s has about 3,000 restaurants in Japan. The local MOS Burger chain has almost 1,400 restaurants. (Editor’s note: Burger King re-entered Japan in 2007, after a first attempt had failed after eight years in 2001 amid tough fast food competition.)

Ad Age: How big is your marketing team?

Ad Age: So, why red this time?

Mr. Tatsuiwa: This is the fourth year we’ve had a black burger, and we wanted to have something new happen this year. And we were also thinking about the Burger King “Angry Whopper,” (a jalapeno-laden rendition of the classic), that launched in some markets, but with the color the same as usual. Brown. We thought making it red would make people curious and express the hot taste.

Ad Age: Are other markets picking up on these ideas?

Ad Age: On April 1 you had a one-day-only sale of something called “Flame-Grilled Fragrance.” (The 1,000-piece limited edition flasks sold for $41 and came with a Whopper. They sold out.) Why a perfume?

Mr. Tatsuiwa: The idea came from Burger King in the U.S., they had a perfume several years ago. We thought we could use that on “Whopper Day” in Japan.

We were thinking if we announced a launch for this kind of perfume for April 1 (yes, April Fool’s Day), some people might think it wasn’t true (and that would generate more conversations about it). But we seriously produced this product, and that was very effective. We collaborated with a local perfume company and asked them to produce a flame-grilled smell. It was a very unique order for them. They worked very hard on it. (I’m not making this up, gang. Sounds like the perfect White Elephant gift.)

Ad Age: How were sales?

Mr. Tatsuiwa: It was a record for one-day sales on a weekday.

Now, honestly, even as promotion-crazy as we tend to be in the US of A, I wonder if either one of these would fly. What do you think, marketers and creative folks? Would any of you client companies have the guts to try something like this or to let your agencies develop this kind of special promotion?

Hell, if it tastes good, why not. Just put on a blindfold while eating one (especially the black version).

I wonder. When it comes to eating places, aka restaurants, do most folks care more about the food or the place’s logo?

I don’t wonder that much about it. They care more about the logo, right?! I guess it depends on whom one asks. Most consumers probably don’t give a damn about the logo. As long as the food and service is good and dependable and the price is fair, that’s all that matters to them.

Even though Olive Garden, part of Darden Restaurants, Inc., recently changed their logo as part of an overall revamp of their brand, I don’t see that a major reduction in available parking places is about to occur at the Olive Garden close to me. That place is always packed.

Disclaimer: I haven’t been to an Olive Garden in years, but when I did go, I enjoyed the food (at least what I got). My wife wasn’t terribly impressed.

As part of this rebranding effort, I understand that the menu and interior appearance of the place will get an overhaul. Hmmmmm.

Changing up the logo is one thing; changing up the menu could start a revolt. It could also be a good thing. Time will tell – along with the tastiness (and the portions) of the fare.

Then there’s that new logo.  Granted, if they were after a completely different look and feel, they got it.  What was their thinking, though. There’s no consistency between the old and new one.  What happened to a refresh or an update, as opposed to, well, whatever this new one is supposed to be?

The leaves don’t even resemble an olive branch. What happened to the grapes? Olives? No where to be found (unless its subliminal).

Most likely the folks who are in an uproar about the new logo are coming from the marketing (design) perspective. That’s fine. Consumers and Olive Garden fans, however, may be (and should be) more interested in what’s to come menu-wise. The new logo to them may be much ado about nothing.

Meanwhile, I may stroll down the street for a hearty helping of minestrone and some bread sticks. Logos notwithstanding.