Images have a way of striking our emotions. Creativity is fueled. Emotions are stoked.

Some find peace while others find fear. Art and photography have a way of doing this. Museums and art galleries tend to bring these feelings out in all of us.

These past few months I’ve come across a variety of different images, different ways of conveying creativity. Since that’s what this blog is all about, I thought I’d share  a taste of what I’ve viewed. 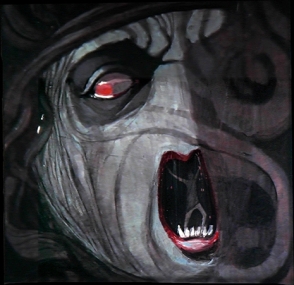 The Museum of Fine Arts Houston, The Guggenheim Museum in New York, and, yes, even Rod Serling’s Night Gallery in your mind are fine examples of artistic and creative expression. Those of you outside the U.S. who may not be familiar with Mr. Serling may find this rather intriguing regarding the paintings featured in his Night Gallery.

A few weeks ago I wrote about a summer conference I attended at Houston’s Jung Center on Imagination. As they often do, the Center featured several paintings on display at that time. A few caught my eye for one reason or another. If you’d like more information about these images, please contact The Jung Center.

I was struck by the vibrant colors immersed onto a dark background, but with areas of white and yellow stubbornly bursting through. I thought, “Chaos, indeed, but in a quiet, peaceful setting.” 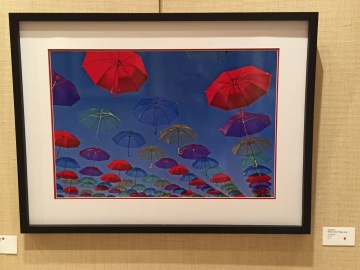 I just thought this was a neat photograph. Then, the more I looked at it, I thought . . . “Hmmmm, umbrellas in variety of colors . . . would make an interesting ad for Travelers Insurance.” 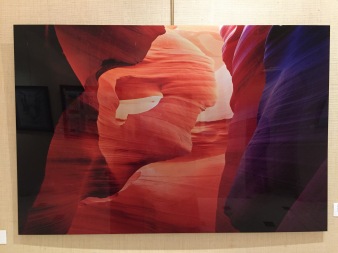 This reminded me of some very cool abstract art that Apple may have for a screen saver, very vibrant in colors – you can’t take your eyes off it. I couldn’t. It’s actually a photo print on metal.

Part of the Vanzant Driver presentation, “The Street of Heaven Was As Glass”

Vanzant’s discussion was intriguing on “The Visionary Imagination” alongside Jay Wehnert. This illustration was one of several artistic expressions presented that challenged the “boundaries of the imagination.”

These next two images below were not part of the Jung Center’s exhibit, but two very different photographs that caught my eye. 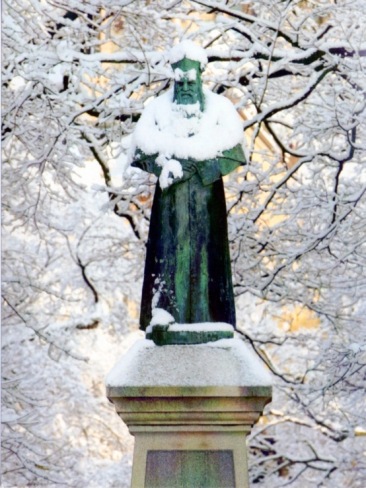 This first one was sent to me from the University of Notre Dame in South Bend, IN as part of a Thank You for supporting the university.

It captures one of the iconic statues on campus during Winter with the Golden Dome peaking out from the background. Note the areas of snow  acting as “winter eyebrows.”

This second one was an ad I saw in a publication, Arts+Culture, based in Dallas, Texas. It’s one fine publication covering the arts and culture scene in Texas.

The photo immediately captured my attention because I wasn’t sure if I saw what I thought I saw: A young girl “shooting the bird.” Then I read the caption: “A little rebellion now and then is a good thing.” Thomas Jefferson said that and I’m inclined to agree. 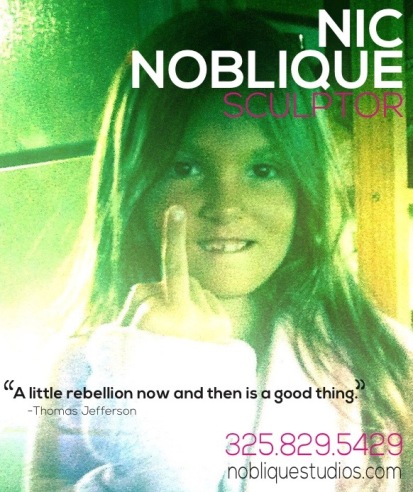 The ad is for Nic Noblique -Sculptor. When I emailed Nic for permission to run the ad featuring his daughter, he told me the ad had received quite a few comments and he’d gotten good response from it. The photo, taken a few years ago when Azo was seven (she’s now 12), afforded their daughter the opportunity to flip the bird and “get it out of her system.”

I applaud both Nic and his wife Audra, not to mention their daughter, for having the guts to run an ad like this, and Arts+Culture Magazine for having the maturity to approve it for publication.

Art is a very subjective medium. Advertising can be as well. Both can be perplexing. As varied as our society is today, so are the images we confront.

Kudos to the creatives and artists who continue to push the envelope with taste and style and who entice our imagination and intrigue our minds.

And a thank you to those museums and galleries who think enough of the contributions to our collective, creative universe to exhibit and publish these works.

To the creators, go the spoils.

To the viewers, go the enjoyment.

To everyone, onward. Create!