That’s what a recent weekend conference at The Jung Center on Montrose in the Museum District here in Houston explored. What did we come up with? Jury’s still out. 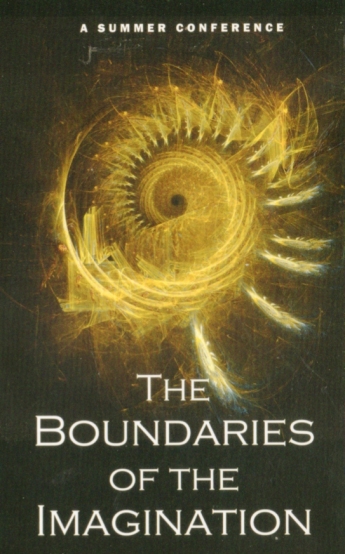 I’ve been to only a couple of seminars at The Jung Center over the years and, coincidentally, both had to do with imagination as it relates to imagery and creativity.

Both were also moderated by my friend, Felix Scardino, author of The Pebble and the Canyon.

Now, I’m not a therapist nor do I have that type of background, although I have spent years in the advertising and creative industry so, I suppose, there are some who would say I’ve been in therapy all these years!

This special summer conference, The Boundaries of the Imagination, intrigued me.

When I reviewed the list of speakers for this weekend conference, I’ll admit to not knowing any of them. Yet, I anticipated the experience, the topics. I also assumed I would be in the minority; I am not a therapist or a psychologist. I’m just a curious creative.

Friday night began with a lecture from Jeffrey Kripal, PhD, past chair of the Department of Religious Studies at Rice University. His lecture, “When the Imagined Is Not Imaginary,” seemed to center on the evolutionary goal of imagination. Quite extraordinary.

Though it was a very thoughtful discussion, it really got down into the “imaginary weeds” for this listener. When Jeffrey mentioned the term “imaginal,” he went on to define it according to one Mr. Frederick Myers as “imagination on spiritual steroids.”

According to Frederick Myers, imaginal is defined as “imagination on spiritual steroids.”

HELLO!  Spiritual steroids? I’m not sure what the hell that means but it grabbed my attention.

Saturday morning’s session, “The Street of Heaven Was as Glass,” was a conversation between Jay Wehnert (right, below) of Intuitive Eye, his arts organization founded in 2011, and Vanzant Driver (left, below), a Houston-based artist whose work  is included in The Menil Collection. 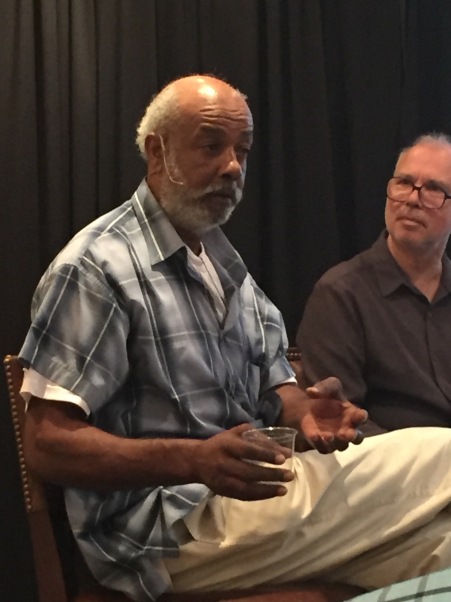 This conversation was a highlight for me personally just to listen and observe. One of the observations from Vanzant really touched my spirit – “Inspiration is the medicine for the soul and creativity.”

“I can’t wait to inspire somebody,” Vanzant said. “This should be what gets you up everyday.”

Inspiration is the medicine for the soul and creativity – Vanzant Driver

Since different attendees would no doubt mention other things that got their attention, I won’t attempt to cover everything from that weekend. My thoughts and impressions are my own. So are my dreams and my imagination. 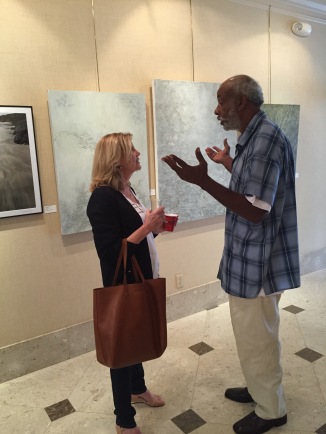 There will also be other blog posts, I’m sure.

As a photog-hobbyist, I couldn’t help but capture one of my conference colleagues chatting with Vanzant about her artwork in abstract visualization (I think that’s what she called it). Her paintings are hanging in back of her and Vanzant.

According to Vanzant, the philosopher, “the most powerful things in the universe are things you can’t see.”

We sometimes forget this. Hmmm, let me rephrase that . . . we rarely remember this!

Before we wound up our weekend conference, I participated in one last exercise. I played in the sand. Well, I had my own sand trap, er, tray. I even got to select as many toys, er, symbols, as I could carry.

But before that, I closed my eyes and “became one with the sand.” I moved my hands around the sand and just had fun, like the little kid inside me did many years ago, both on Lake Charles (LA) and Galveston beaches. 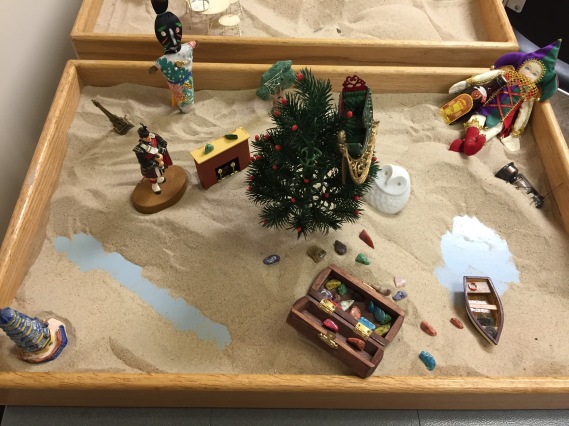 “Playing in the Imagination” was what we did under the watchful eyes of Michele Lees, a depth psychotherapist in private practice in Houston with emphasis and training in Jungian psychology. And, evidently, one helluva sand castle builder!

Each one of the objects in my sand tray above represented something to me; some of them really did “call out to me” to be chosen, just as Michelle advised they would.

In case you can’t quite make it out, that is indeed a sleigh sitting within the branches of the Christmas tree . . . on a beach next to a treasure chest near a beached boat. The symbolism I was feeling that Sunday morning was both of fond memories and sadness (note the half buried Eiffel Tower near the voodoo doll), and, well, use your imagination to figure out the rest.

The entire weekend was like nothing I had experienced before. Not being a therapist, I wasn’t sure what to expect. Being of the creative bent, I anticipated exploring my imagination in ways I had not, uh, imagined before.

Each one of the “speakers, therapists, authors, experts” were enlightening and, dare I say, imaginative. If you get the chance to hear one of these folks speak or present, go for it.

Have we been underestimating the power and reach of the imagination? Perhaps.

It is my firm belief that creativity is entrenched in our imagination. In fact, my favorite definition of imagination is “intelligence having fun.”

Yet, is imagination a location, an experience, a physical phenomenon? What is, as the brochure talking about this conference asks, its hidden power in a culture that tends to understand imagination as the opposite of reality?

Are there boundaries of imagination? If so, how many and are they truly discernible? What are the possibilities in exploring them and what do we risk?

What if we come to understand that imagination is reality?

Then, my friends, we come to grips with our emotions and, when we’re ready, if we truly are, we take another trek into the vast landscape of our own imagination to explore.

But be cautious. Rational thought may be cast aside; symbolism may take over. Creativity may be awakened. A new masterpiece may be unfolding right before your eyes.

Editors Note: Those of you wanting to see Jay & Vanzant’s conversation can view it on YouTube.

2 thoughts on “The Boundaries of the Imagination”