Here’s the third in a multi-part series of various worth-remembering quotes which I believe you’ll find interesting and hopefully inspiring. Excerpted from the newsletter “Smart Brief” from the American Advertising Federation, these quotes are usually from a member of the Advertising Hall of Fame. 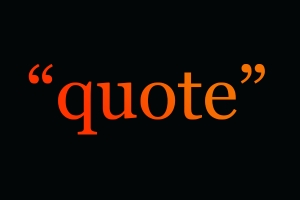 21. And I have always believed that advertising has a powerful impact on our society. It not only influences public taste and conduct; it also helps shape society’s values.

22. Creativity is no longer about grabbing attention or raising consumer awareness. Its goal is to remind consumers about what is fundamental and gratifying about a brand.

23. Nothing splendid has ever been achieved except by those who dared believe that something inside of them was superior to circumstance.

24. There is no such thing as a mass mind. The mass audience is made up of individuals, and good advertising is written always from one person to another. When it is aimed at millions, it rarely moves anyone.

25. Advertising is a non-moral force, like electricity, which not only illuminates but electrocutes. Its worth to civilization depends upon how it is used.

26. Creativity is so delicate a flower that praise tends to make it bloom while discouragement often nips it at the bud.

27. An idea can turn to dust or magic, depending on the talent that rubs against it.

28. Rules are for people who don’t know what to do.

29. There is not some absolutely revolutionary model that somehow produces the best work. The core principle is still a battle between what’s relevant and what’s not.

30. When we are too timid to risk failure, we reduce the opportunities to succeed. And we eliminate the chance to learn.

So, which one or ones is/are your favorite(s)? Lemme know.